Finding God through the lens of an artist

I am a sucker for a happy ending. I like when boy gets girl, when the world is saved, when a lesson is learned and everyone comes out the richer (emotionally and spiritually, not necessarily monetarily) for the experience. I believe that there is something deep in the souls of humankind that longs for the “happily ever after” offered by our fairy tales, even if we don’t think it actually happens in real life. This “something,” mirrors the end of the Bible, when God finally vanquishes evil and everything turns out all right.

Yet, most of my favourite films are tragedies. Braveheart, Gladiator, and my newest favourite, The Prestige (which has been out for ten years, but I finally got around to seeing just this past weekend) all see the downfall of their protagonists by the end of the story. The heroes come up against forces they cannot overcome, whether a foreign oppressor, an corrupt leader, or selfish ambition, and eventually succumb. Not the happy ending we hope for. So, what makes them so compelling? 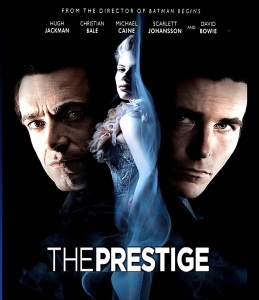 In the first two, we find heroes who seek revenge and justice (coincidentally, for the murder of their wives) against a powerful foe. Even though both could probably have turned from their path and avoided their fateful end, their passions keep them on course. We cheer because they are on the side of justice. The heroes have been wronged, people have been hurt, and we want to see the bad guys get their comeuppance. In the end, they succeed in their quest, but it costs them their lives.

On the other side, we also get to see the tragic fall of the antagonists.Claudius’ obsession with being loved (stemming from a lack of love from his father), drives him to horrendous acts of evil, and ultimately, his own downfall. He dies unloved and alone. Edward Longshanks’ pride and ambition leads him to the dissolution of his bloodline, with everything he has fought for at an end.

The Prestige, on the other hand, pits two “protagonists” against each other. We watch as their competition and rivalry (also started by the death of a wife…I’m seeing a trend) consumes the two of them. With several opportunities to walk away, neither chooses to stop the fight, and the battle reaches show-stopping heights and heart-wrenching lows.

In the end, these tragedies teach us something about life, and ultimately, God. Our first two, heroes fighting for justice, teach us that the cause of Good is not an easy, or cheap path to follow. We must be ready to sacrifice everything in our walk with God, or else we will not finish the journey. We must be ready to give our very lives if we want to see change.

They also serve as warnings against our pride. If not for ego, The Prestige would be a much shorter, albeit duller, story. We get to learn the lessons of those pushed too far by their thirst for glory or revenge without the horrific consequences.

I think I like tragedies because they show us people pushed to the very boundaries of the self. Some, when pushed, show the glory of God as sacrificial Lamb. Others, the pain and misery that accompany a fall from grace. From both, we learn the cost of living in a fallen world, the cost of being human.

But what do you think? Are you drawn to tragedies, or avoid them like the plague? Can we learn more from the “tales of woe,” or have I stretched beyond what the allegory can hold? Chime in!

I'm an Arts Director and Chaplain who wants to talk about the places I see God: in comics, movies, the stage, and the church.

Something to say? Cancel reply